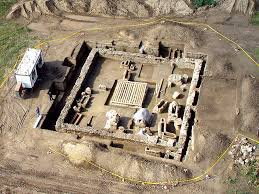 EASTERN SERBIA - One of the latest finds at the ancient Roman site of Viminacium is a unique silver plate with an inscription in ancient Greek on it. Archaeologists found it under the skull of a three-year-old buried in a newly found grave. Over 15,000 graves have been discovered at Viminacium, the largest number at any Roman archaeological site. Only about 4% of the site has been explored.

Dr. Miomir Korac, team leader at the site, said the inscription on the plate is a combination of letters and numbers similar to those known from ancient Greece that were in use throughout the Roman Empire up to the 4th century AD. “They were used for requests to supernatural forces or deities and demons, most often curses or witchcraft such as love spells.” The text is known as voces mysticae and the plate includes other astrological symbols.

Viminacium dates back to the first century AD. It was a provincial capital and military camp in the Roman province of Moesia, present day Eastern Serbia, near the town of Kostolac. Based on research, the ancient city is believed to have had about 40,000 inhabitants. The site includes remains of temples, squares, palaces, hippodromes, Roman baths and a 12,000-seat amphitheatre spread over about 1,100 acres. It lies on the Roman road Via Militaris. The city was destroyed by the Attila the Hun in the 5th century AD, but later rebuilt by the Emporer Justinian the Great, whose aim was that his reign would be distinguished as “renovatio imperii” or “restoration of the empire.”

Strategically, Viminacium was one of the most important Roman cities and military camps from the first century for over 400 years. “Its exceptional strategic importance was reflected both in the defense of the northern border of the Roman empire and in turn of communications and commercial transactions,” it is stated in Wikipedia. The city prospered from its position on land and waterways. The river valley was rich in both ore and grains, helping to make it a trade center.

The first legion attested at Viminacium was the VII Claudia that came from Dalmatia in 52 AD. During the reign of Hadrian, the site received city status. By the third century it was a Roman colony with the right to coin local money. Diocletian is said to have reorganized Viminacium, making it the capital of the province of Moesia Superior Margensis.

This first excavation in Serbia began in 1882 by Mihailo Valtrović, founder of archaeology in Serbia and first professor of archeology at the college in Belgrade. He had been educated in architecture, and maybe for that reason he lacked resources for his work. The state provided him with twelve prisoners to do the manual labor.  Research continued under the first Serbian trained archaeologist in the mid 1890s Miloje Vasić. It is recorded that Queen Draga Obrenović visited the site and donated 100 gold ducats for further excavations, reportedly the first donation in Serbia given to the exploration of the antiquities.

The National Museums in Belgrade and Požarevac have over 40,000 rare and invaluable items found in Viminacium, hundreds are made of gold and silver. Some tombstones and sarcophagi that have been unearthed are decorated with relief representations of scenes of daily life.

According to the Roman document Notitia Dignitatum, a section of the Roman Danube fleet was anchored in Viminacium. Since the locale is not on any modern watercourse, it is theorized that either the Danube was flowing further to the south than it does today or a large arm or the river separated from the main flow in this direction. The modern fossil riverbed has yielded numerous naval artifacts.