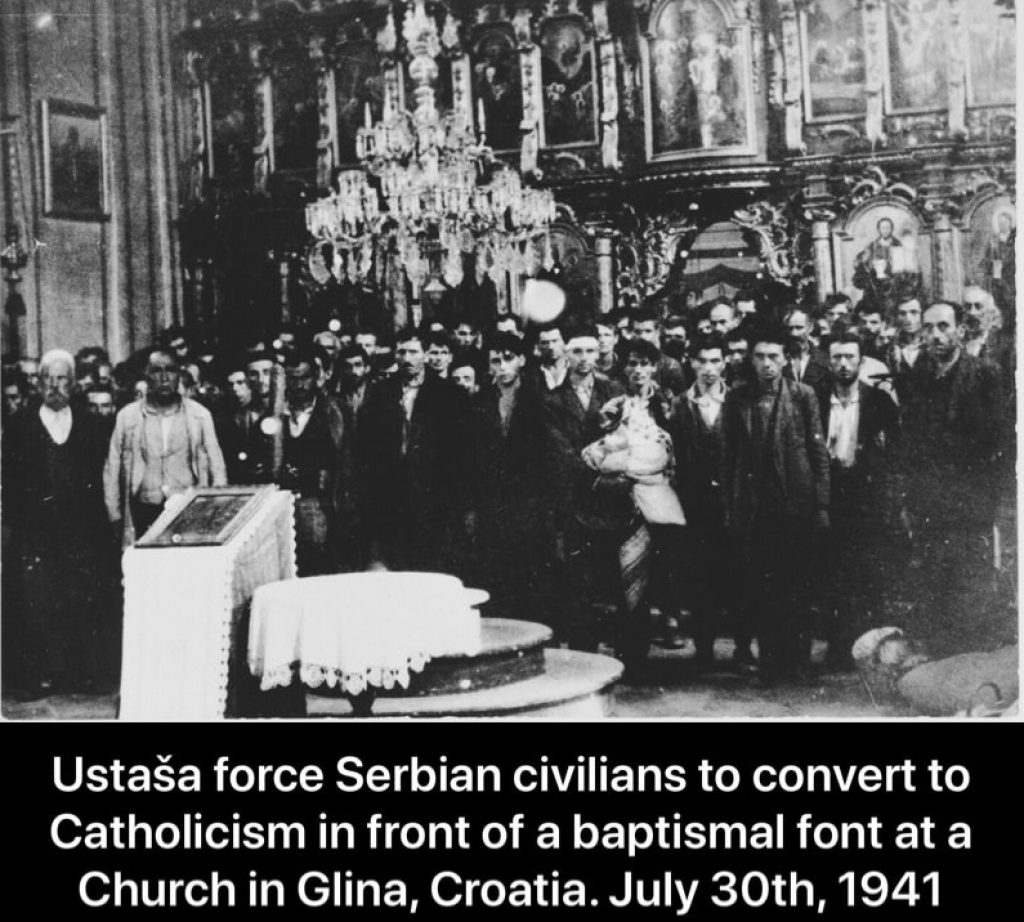 GLINA, CROATIA - Once again, the Serb National Federation will lead the way in helping with the construction/reconstruction of a Serbian Orthodox Church, as it has in the past.

In this case, however, it is not the church, but the parish home in Glina that is in desperate need of help to house the hard-working priest there, Fr. Goran Kalamanda, “rukopoložened” to the priesthood August 1, 2019, and his lovely wife Jelena. The couple was married last year and are now expecting their first child.

Throughout its history, the SNF has been at the forefront of all causes to help our Serbian people in America, Canada and in Europe as well. Because of the help from American Srbobran readers, we have been able to build new churches, repair old ones, donate bells to Vracar, and much more.

The parish home in Glina is in very poor condition as is evidenced by the photographs. This project is even more significant because of its WWII history, where so many of our people suffered and were killed in a most brutal fashion.  Thanks to the goodness of Midwest Serbs, the Glina church has been rebuilt.  Let us now all fervently join forces to help rebuild the parish house.

In 1941, Serbian villagers were being killed in their homes and on their farms, rounded up and put in jail because they were Serbs and Orthodox.  The Ustashe, worse than their German Nazi allies, had a pogrom of “Kill a third, convert a third, and send a third back to Belgrade.”  In Belgrade, Serbian bodies were floating down the river, many with derogatory signs attached.

It was under these circumstances that in July, 1941, the Glina residents were “called” to their magnificent church devoted to the Holy Mother of God, which was begun in 1722 and completed in 1827. These poor souls, some with caps in hand, stood in the middle of this precious classic building with the incredibly beautiful iconostasis. One has to wonder what the famous Serbian artist, Pavle Simic or the German altar carver Josif Kirstner, or even Austrian Emperor Franz Josef who donated 2000 gold forints to see it completed, would have thought about the horrible atrocities that would happen next.  There would be a mass conversion to Catholicism, and then the Serbs would be killed, counted as Croatian Catholic dead.

To save their lives, to live another day, even one of our most prominent priests and SNF scribes, the late Proto +Vojislav Dosenovich, who wrote the book “So Help Me God” and in June 1955 published an article in the American Srbobran, told how his own father, after spending several fearful nights in a cold jail cell falsely accused of a crime, and watching all of his neighbors’ homes being burned, signed a paper saying how his family would convert to Catholicism, to be free from this perfidious nightmare, the only choice that offered any hope for survival.

When he came home that night, free from jail and told his family of his decision to convert at the dinner table, his wife dropped the dish she had been drying.  “My dear Pero,” she said. “We are born into our faith and, if need be, let us die in it, for changing one’s faith will hardly help anything. For if we do happen to survive, shame will follow us before God and man, for as long as our kind lives.”

The elder Dosenovich then threw the conversion paper into the fire. A few weeks later, Dosenovich wrote, homes collapsed in fire, hills and field were flooded with dead bodies of innocent people, killed only because they happened to be Serbs in name and Orthodox in faith. In October 1941, two pale pillars of light stretched upward toward the heavens.  These pillars were the sites of two mass graves, some three thousand martyrs killed, and among them his father, brother, and many relatives and friends.

“During the Second World War, on the 27th of July 1941, the Ustashas committed an excessive massacre of the Serbian people, right here, in the church of Holy Mother of God in Glina. The church was burned and subsequently demolished the same year, on August 12th. To destroy evidence of this horrendous crime, the demolishment was entrusted to Anton Gregoric, as well as one of the Ustashas, Stjepan Frajfer. Copper from the bell tower, the bell itself as well as all the liturgic objects were collected by the Roman Catholic parish. All the remaining church values were stolen.

“After the Second World War, the remains of the victims of Glina’s massacre were relocated to the Serbian Orthodox cemetery in Glina. On the site of the ruined church, on the 27th of July 1951, a memorial was erected for all the victims of the war.

“After long and hard negotiations between the authorities and the Bishop of Gornji Karlovac, in the period of 1959 to 1961, permission was obtained to build a new church. Unfortunately, the authorities did not allow the new church to be built on the exact place of the old one, and the Orthodox Diocese was given a new location on a side street.

“On the 27th of May 1961, the Bishop Simeon blessed the stone for the foundation of the new church in Glina. The foundation was financed by Serbian people in the USA and Canada, for the peace of all the souls, men and women, who suffered from the bloodbath in the church of Glina in 1941. Old documents of the church noted a very difficult and long process of re-building, partially because of problems with authorities, who did not pass the construction permits right away, and partially because of the local people who were against the construction and would even go to the lengths of deliberately puncturing the tires of trucks that were transporting the building materials.

“The left apse of the new church holds the Holy Throne for the altar of Holy Serbian martyrs, made of marble in the form of a sarcophagus, based on the drafts of the Bishop Simeon. The sarcophagus holds the old Glina church’ Holy Throne, as well as its soil, saturated with the blood and holy bones of the Glina’s martyrs. The Serbian Patriach German also gifted parts of the relics of the Holy Prince Lazar from Kosovo, and they were laid down in the altar of holy Serbian martyrs.

“The newly completed church was blessed on September 21, 1963, by bishop Simeon. The icons for the iconostasis were done by academic artist Milovan Arsic from Belgrade, based on the Serbian monasteries Sopocani and Decani. He also completed two frescos in August 1966; one above the iconostasis, representing the Serbian Saints, and one of the Serbian Martyrs, above the choir. A fresco representing the Saint Bishop Sava of Gornji Karlovac, who was killed in a most cruel way along with his clergy, is also shown here.

“Unfortunately, history repeated itself - the church was robbed and mined in 1995. The altar was destroyed, the foundation cracked, the roof tiles scattered and the iconostasis badly damaged. The bell tower had to be renewed in 2003, due to the damages from the mining and bullets.

“The parish home in Glina was built in the 20th century. This building faced the fate of the people; it was broken into and robbed during 1995. By the beginning of the 21st century, very minor repairs were done, forcing the priest and his family to live in very inhumane conditions.”

Hundreds of thousands of Serbs were killed by the Croatian Ustashe.  But that included more than 18,000 ethnic Serbs just from Glina and surrounding areas.  Many were from Vrginmost and Kordun, according to Svetozar Dancuo. He said that is one reason why the direct descendants of some of these victims from the Kordun Social Club in Toronto will also offer help for the repair of the building.

Today, only a photograph of the original incredible iconostasis remains, in addition to the contract from August 5, 1866, signed by the artist and the church community, witnessing the religious compositions.

In September 2019 Father Goran Kalamanda was appointed the new priest for the parish of Glina. Upon arrival to his first parish he encountered very difficult living conditions. The parish home was damaged, forcing the young priest along with his wife Jelena to live as tenants while trying to restore the property of our Holy Church in Croatia. The challenge ahead was not going to be easy. It was upon him to help the people find their faith after living through such tragedies and begin the renewal. The Bishop of Gornji Karlovac Gerasim blessed the renewal of the parish home. The resources at their disposal were very limited. He could not ask for financial help of the Serb returnees who have been living very difficult times for years, and despite everything, guided by their feelings, have returned to their homes to welcome their last moment and eternal life. It is a rarity to meet young people in this Serbian community; even the few present are living a difficult life, day to day, surviving on agriculture.

Father Goran says that this young population must be reminded of who their ancestors and their roots are. The big challenge before him he says, is spreading the Orthodox faith, and coming up with the means to survive and simultaneously, never forgetting the ones who suffered.

I am thrilled to announce that with Bishop Gerasima’s blessings, not only will there be a memorial chapel in the parish home, but also a museum room, dedicated to the martyrs who have died due to their Orthodox faith in the periods of 1941-1945 and 1991-1995 by the hands of the Ustashas.

Fr. Goran said, “In the mentioned chapel, there will be a memorial plaque with martyrs’ names, as well as a permanent display of documents and photographs of the suffering of our tortured people in Glina and the surrounding areas. In this way, we will forever preserve the prayerful memory of all the victims, because, unfortunately, we cannot restore the memorial at the place where it was located until the beginning of the last war events in this area.  Never to be forgotten.”

We will no longer accept donations for Glina at this time.