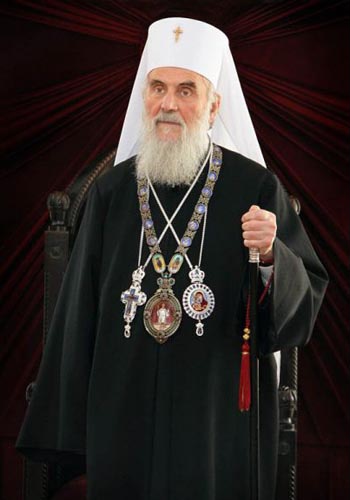 BELGRADE - Archbishop of Pec, Metropolitan of Belgrade-Karlovci and Serbian Patriarch Irinej (Gavrilovic) reposed in the Lord in the Military Covid Hospital Karaburma on Friday, November 20, 2020, at 7:07 AM. local time.

His Holiness was born near Cacak, Serbia, in the village of Vidova to parents Zdravko and Milijana Gavrilovic. His baptismal name was Miroslav. He attended elementary school in his native village, then finished high school in Cacak. He completed Theological School in Prizren, Kosovo and Metohija and graduated from the Faculty of Theology in Belgrade.

After completing military service, he received monastic tonsure in October 1959 at Monastery Rakovica by †His Holiness Patriarch German, and received the name Irinej. He was appointed as professor of the Prizren Theological School during which time he pursued postgraduate studies in Athens.

In 1969 he was appointed principal of the Monastic School in Ostrog Monastery, and in 1974 he was elected Vicar Bishop of the Serbian Patriarch with the title of Bishop of Moravica. He was elected Bishop of Nis in 1975.

The act of enthronement of His Holiness Irinej, Archbishop of Pec, Metropolitan of Belgrade-Karlovci and Serbian Patriarch, was performed on January 23, 2010, during Holy Hierarchical Liturgy in the Cathedral Church of Archangel Michael in Belgrade. The solemn Liturgy was officiated by the elected Serbian Patriarch Irinej with the concelebration of his brothers Bishops, priests and deacons, as well as representatives of the Russian and Greek Churches. Patriarch Irinej was formally enthroned to the ancient throne of the Serbian Patriarchs in the Patriarchate of Pec on October 3, 2010.

His Patriarchal Ministry during very difficult times advocated peace and stability. He was quoted in an interview soon after his election, saying, “The Drina River (between Serbia and Bosnia and Herzegovina) is not a border, but a bridge that connects us. Although, in a way, we are one even today, God willing, we will soon really be one…it is enough that we are one as people, as the Orthodox Church, and that we are on the same path of St. Sava and Christ.” He praised the Serbs of Banja Luka stating that they fight to preserve the Serbian name, “Although this is not at all an easy task, they are succeeding.”

His Holiness was decorated by His Royal Highness Prince Davit Bagration Mukhraneli Batonishvilli of Georgia with The Grand Collar of The Order of The Eagle of Georgia and The Semeless Tunic of Our Lord Jesus Christ in December 2011. He has been considered, both abroad and at home, as a moderate traditionalist, open to global inter-religious dialogue. In 2013, he indicated he would not oppose the first-ever visit by the Roman Catholic Pope to Serbia as part of celebrations of the 1,700th  anniversary of the Edict of Milan, the law under which Roman emperor Constantine, who was born in Nis, ended the persecution of Christians. His Holiness said that the visit would present an opportunity for a dialogue.Top of Form

Regarding the accession of Serbia to the European Union, he said, “Serbia should not look with suspicion at the EU, if the EU respects the Serbian identity, culture and religion. We believe that we are an historical part of Europe, and we want to be in this family of peoples. In the accession we will accept everything that is not in contradiction with our cultural and historical identity.”

As Head of the Serbian Orthodox Church His Holiness represented the highest spiritual authority among the Serbian people in Serbia and abroad. Under his leadership he published an exceptional number of academic, liturgical, religious, and popular books for education and spiritual uplifting of the faithful. His Holiness was well known as a great preacher and used every opportunity to preach the Word of God to all people. Most recently, the Diocese of Nis published a collection of his sermons delivered while he was Diocesan Bishop there.

His Holiness Patriarch Irinej’s Inter-Orthodox and ecumenical activities included participating in the 1250th anniversary of baptism of Russia, a visit to Monastery Hilandar on Mount Athos in 2013, an irenic and canonical visit to the Patriarchate of Alexandria and All Africa in 2012, and in 2014 he accepted the invitation of His Beatitude Anastasios of Albania to visit Tirana for the consecration of the Cathedral church of the Holy Resurrection. He took an active part in the Pan-Orthodox gathering in Constantinople in March 2014, when it was decided to begin with preparations for a Great and Holy Pan-Orthodox Council to be held in 2016.

Upon hearing the news, expressions of condolence arrived from throughout the world.

SNF President Dane Medich said, “It is with a heavy heart that the Board of Directors,  staff and membership of the Serb National Federation  grieve the passing of Patriarch Irinej.  His Holiness was a man of God in every measure. He will be missed here on Earth, but as all Serbian Orthodox proclaim, Vjecnaja Pamjat!  Memory Eternal! May Patriarch Irinej rest in peace with his brothers and sisters in Heaven, where there are no tears or sadness but eternal life. Glory to God in the Highest!”

His Royal Highness Crown Prince Aleksandar said,  “All of us have tragically lost our great spiritual leader. His Holiness, our Patriarch Irinej will be remembered as a great leader and fighter for the Church, the Crown and the Serbian people. We will keep him in our prayers, hearts and memories.

I was deeply touched by his faith, as an Orthodox Christian, for the blessings of his paternal advice he gave me, his love for all and for his wisdom.”

“We mourn with our beloved Serbian Orthodox brethren during this difficult time,” said St. Vladimir’s Orthodox Theological Seminary President Fr. Chad Hatfield. “We remember fondly Patriarch Irinej’s visit to the Seminary (2015) when His Holiness beautifully reminded us of the close ties between St. Vladimir’s and the Serbian Orthodox Church.” The Seminary’s Board of Trustees and Faculty bestowed upon His Holiness a Doctor of Divinity degree, honoris causa.

His Eminence Metropolitan Hrizostom of Dabar-Bosnia celebrated a memorial service for the newly departed Serbian Patriarch, Our Father Irinej, at the Cathedral Church of Holy Archangel Michael in Belgrade soon after the announcement of his passing.

Coverage of the Patriarch’s funeral will be in the next issue.

May his memory be eternal.