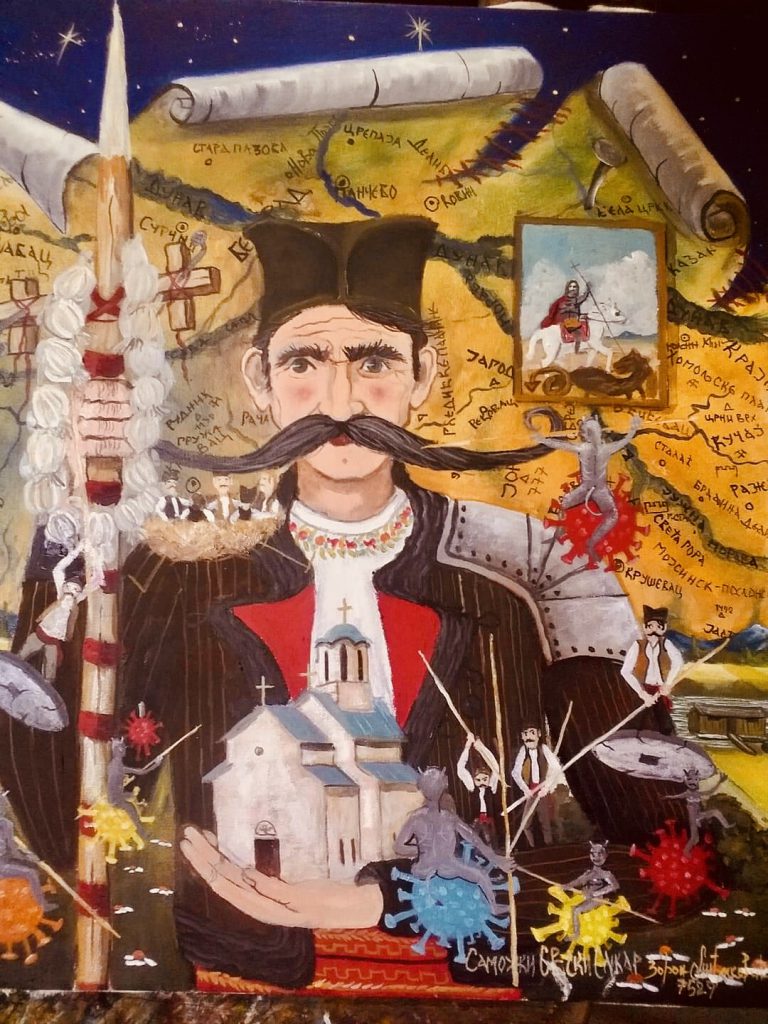 I began writing this story Serbian Orthodox New Year’s Eve, January 13, 2021. I was listening
to “Sviljen Konac” (Silver Threads) playing beautifully in the background on my computer and I
stopped momentarily to read a message from my friend Zoran Andjelkovic, coming through
Facebook from his village of Mrzenica, Serbia. It read:
• Оно што је било, биће и увек, Србин слави и Славића; Обичај је прастари, а ми Срби,
православци, настављамо традицију и остављамо је својим потомцима. Нека ко год
може да слави, помозите им Тристе Год. Срећна српска Нова година!
• What was, will always be, a Serb celebrates and will continue to celebrate; The custom is
ancient, and we Serbs, Orthodox, continue the tradition and leave it as a legacy to our
descendants. Let whoever can, celebrate, God help them three times over. Happy Serbian New
Year!
It made me smile. That’s my Zoran! I only came to know him when I first saw photos of the
paintings he drew and posted to his Facebook page. This is the good part of Social Media,
allowing us all around the world to communicate with distance being no problem.

Zoran is one of the finest of naïve artists, a National Treasure for Serbia. Naïve art is art for the
soul: cultural folk art, unconventional, instinctive and avangard all at once with vital projects
covering social, political and artistic context. Sometimes the art has a critical component,
denouncing injustices suffered, and you can see that manifested in Zoran’s artwork.
Other times it’s just “magical,” with fantasy worlds, where St. George, Nikola Tesla and even
Donald Trump can all be on one canvas. Zoran, mostly self-taught, has captured Serbian history
and with his incredible ingenuity, the expressions he conceives come to beautiful fruition. One
after another of his paintings filled me with happiness and admiration as I valued not only his
artistic talent to portray what he wanted, but also his skills in using his boundless imagination
and creativity to make those elaborate paintings “talk” to us.
One “spoke” to me so loudly that I knew I had to have the one with the World War I soldiers
smiling and holding their icons, their shields with the 4Cs. Our problems during Covid were
how to get that painting from Serbia to America when the mail both here and there was
unreliable, and how to get him paid while under lockdown in Pennsylvania? When the
restrictions were lifted, I traveled from store to store to try to get the money to him via Western
Union, but nowhere were the machines working. Frustrated, as it wasn’t just one day but many

no matter how I tried to pay, credit card, check, cash, PayPal, Apple Pay, it wouldn’t work. I
was afraid Zoran wouldn’t believe me and would sell “my” painting to someone else.
But, he’s a man of his word. Over the many weeks he told me not to worry, that one day the
virus would be over. He’d wait. And then along came Alex Malich to the rescue, like a saint
His family had been scheduled to go to Serbia earlier, but the virus delayed plans. Alex promised
to try to meet Zoran somewhere to get my painting and pay him and after a few tries, Alex and
his daughter Sophia, got to meet Zoran by the 1882 Prince Mihailo Monument in Republic
Square to make the great exchange.
Whew! I will be forever grateful. We all celebrated when it was finally unveiled back home. It
was much larger than any of us thought it would be, and so much more vibrant. The figures just
jumped out. My heart soared!
If it were up to me, I would have a whole museum filled with Zoran Andjelkovic’s gems for
posterity. Many others have thought the same, such as Nikola Loncar of Philadelphia from the
Tesla Foundation, John Mrmak from Canada, Dona Petrovic, Dr. Marina Bulatovic Barny,
author of “Nina” and Helen Dimitriou Carlson. Helen says she stops and buys Zoran’s paintings
almost every time she’s in Serbia, either for herself or as gifts for very special friends.
Who is Zoran Andjelkovic? I’ll let him tell you in his own words, as translated by his daughter
Jelica, who is quite adept at English:
“I am Zoran, born August 8, 1967. My Slava is Sveta Petka and I was born on Sveta Petka Slava
(8th of August-Prenos mostiju, not the more famous Svete Petke iz Trnova Slava which falls on
27th of October.) My wife’s name is Katarina and my two children are Aleksandar (16) and
Jelica (14), and I don’t have any grandchildren yet. My parents are Radomir and Jelena. I am
the grandson, and great grandson of Hristivoje, Milenko, Ignat and Andjelko Andjelkovic. We
have had that name for 150 years. Before that our last name was Ivkovic. We came here to
Mrzenica over 250 years ago, coming from Bosna and Hercegovina. Before Arsenije Crnojevic,
we lived here around Krusevac.
“My forefathers were fighters for the Fatherland, farmers who were always good hosts and great
fathers. We lived in poverty like other people from our village. We had two cows, a few sheep,
chickens, pigs and my faithful dog, Ciga, my cat Zuća and bird Loker.
“Everything from my childhood I can remember from my grandfather’s stories. He would
usually tell these stories during the evenings while I sat on his knee. He would tell me stories
about the suffering of our people, about the beauty of Serbia, about our kings, emperors like Czar
Dusan, Czar Lazar, military heroes like Miloš Obilic and of Čića Draza Mihailović because he
was in his army.
“When on one occasion he saved a Serbian family from Vrnjacka Banja, my grandfather and
Marisav Savić then became blood brothers. One time they spoke about being in the war. That
evening, I felt like hiding under the covers hearing these stories about the fearless warriors in
great battles, but when I opened my eyes, I found I was on my grandfather’s lap.

“When I was little, there were no toys for us as they were too expensive, so we had to make
them. There were many children in our neighborhood and so we often went to the Morava River
to swim; that was after our duties of feeding and taking care of the animals. When I was young,
corn, sunflowers, wheat and barley were planted in my village. There were many vineyards, too.
Those memories of my village, my playmates and my ancestors I will carry in my heart forever.
“When I was eleven, my sister Vesna arrived. She later married and had a daughter and son.
They live in a village near Krusevac. I tell my children stories from my childhood. For example,
when I was little I always ate melted ice cream because I didn’t know it should be eaten when it
was frozen because my mom always brought it melted when she came out of the store.
“I finished primary school in my village. There weren’t many students, maybe fifteen at the
most. We had a very strict teacher who would beat us if we didn’t know something. I wasn’t the
best student and I even got a bad grade for drawing.
“My father was a valuable man. During the winter he worked as a musician and during the
summer as a carpenter. My mother was a housewife, she cooked our food, cleaned our house
and guarded my sister and me.
“I became interested in painting when I was a child watching my grandfather make various
wooden objects. I wanted to share my dreams and my grandfather’s stories and steal them from
oblivion, and fortunately I found a way to do that through painting. As time passed, I met other
artists from the village across the Morava and we started hanging out and talking about
everything, including painting. They were great naïve painters: Dobrivoje Stepanovic Peca,
Budimir Rajkovich Linger and Milutin Mojsailovic Mile. From Peca I got my first canvas and
colors with which I painted my grandmother Darinka. The paintings are in the house of my
neighbor Slavoljub Rajkovic. And I got to know the world of art, our customs, the people, and
my holy land.
“I had my first exhibition in my village on Vidovdan in 1988, and even the President of the
Municipality of Cicevac came. Vera Milic, mother of Igumanija Katrina from our Monastery of
the Protection of the Holy Mother of God, is recognized in my paintings. And I’ve had
exhibitions abroad in France, the Czech Republic, Poland, Russian, Canada and Bulgaria. I am a
participant in several colonies of naïve artists and my favorite colony is in Volgorad, Russia. For
all this, I am grateful to my ancestors, to God who gave me such beautiful gifts, and the culture
of our Serbian people.”
“My grandfather's house was made by my cukundeda (great-grandfather) and his father,
Andjelko. It was made in the 19th century. That house is very important to me. I made it into my
studio and museum about 30 years ago. That museum has a lot of old things: some of them are
mine but some of them people gave to me. I was born in that house. After that my family made a
new house in the same yard. Near our yard is the railway “Stalac-Kraljevo.” You can also see
the West Morava in the distance.”

Helen Carlson wrote via FB messenger about what a wonderful visit she and her husband Van
(Vasiije) had visiting with Zoran and his family. She sent photos of his ancestral home studio
where he happily and generously receives his guests. If you are lucky enough to visit Zoran in
Mrzenica, chances are he will invite you into his great-grandfather’s home.
Helen said, “His family home is on the same property which is delightful to see with all the little
treasures in it. Then he was kind enough to take us to local sites in his area which include the
Lazarica Church in Krusevac where Czar Lazar and his army took their last Communion before
going into battle. The Garrison is where Lazar and his army assembled before going to the battle.
The Garrison isn’t far from Krusevac nor Mrzenica, but still many miles apart and in a hilly
region. We had to keep in mind how those poor soldiers had to walk to that church and then
back to the Garrison and then Kosovo which was still many more miles away, all on foot.”
While Helen was lucky enough to visit Zoran and his family in person, many of us will only
know him through Facebook or other social media outlets, like Nikola Loncar from Philadelphia
who is so proud of his four paintings from Zoran, and Nikola Mrmak from Canada with his Slava
icons of St. Elijah painted by Zoran. In whatever way you get to meet him, I’m sure you will be
pleasantly surprised and delighted with his incredible art.
Niko nema što Srbin imade, and I’m so glad we have our Zoran, a true national treasure and
Serbian storyteller extraordinaire!