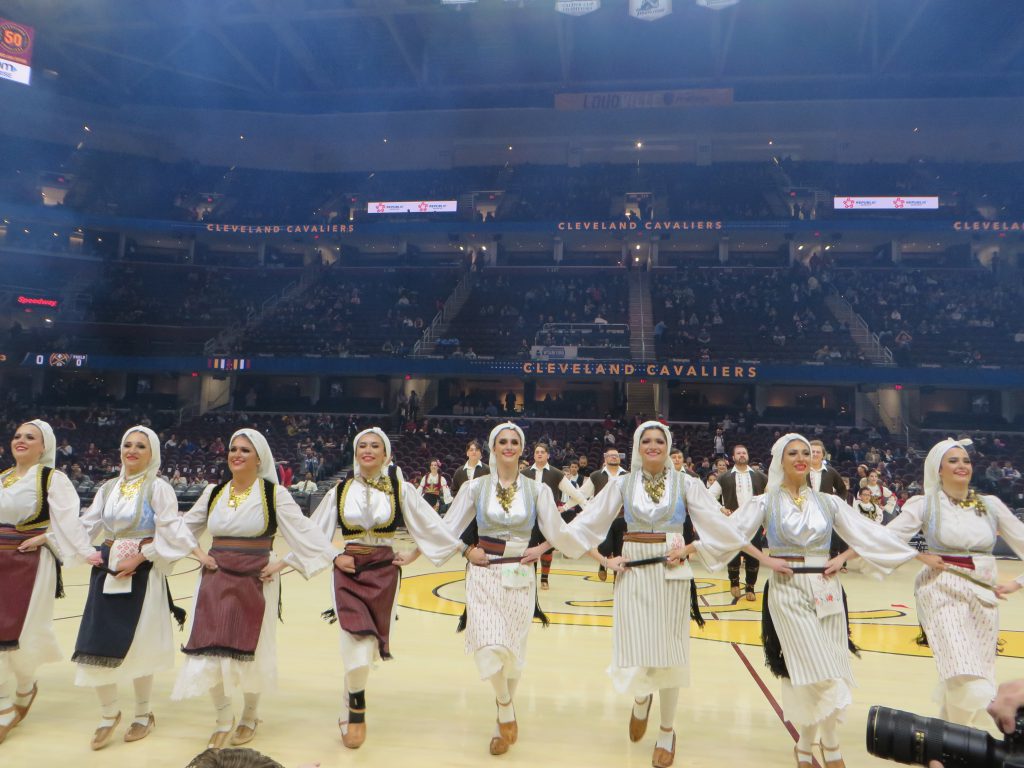 CLEVELAND, OH – During the NBA game between the Denver Nuggets and the Cleveland Cavaliers on March 7, the Serb National Federation sponsored Serbian Heritage Night dedicated to Nuggets player Nikola Jokic, who is also on the Serbian National Team.

Over 600 Serbian fans came from Ohio, Pennsylvania, Michigan, and Illinois to support Jokic. They wore scarves with Serbian flags and logos. Serbian fans were led by “cheerleader” SNF President Dane A. Medich, loudly cheering. When Jokic saw the Serbian fans, his heart was so intense that he immediately ran off the court to meet the audience. The expression on his face was one of extraordinary happiness that overwhelmed him. He met his fans, and most of all, the youngest members of the Cleveland-based Serbian folklore group “Morava,” who were bearing the inscription “We do not give our sanctities” in support of the defense of Serbian sanctities in fraternal Montenegro.

The excitement that Jokic had with his fans was immeasurable. The stadium boomed “Nikola, Nikola” and “Serbia, Serbia.” The echo spread to the American audience. Jokic’s and the heart of the Serbian fans were filled with joy, which was memorialized in photographs.

Before the game, “Morava” inundated the court by performing traditional Serbian folklore dance. The audience delighted in the rhythm of the Serbian music. The folklore group showed all the splendor and richness of Serbian cultural heritage that the American audience rewarded with thunderous applause. The American flag was carried by members of the Serbian folklore group for the singing of the national anthem. By holding the American flag, the Serbian-American Diaspora in the United States displayed their great loyalty to their new homeland as well as friendship between the Serbian and American people.

Although the Denver Nuggets lost the match, it had little impact on Jokic and the Serbian fans. Jokic pointed out that tomorrow is a new game, saying “Let's move on.”

Repotedly, the host Cavaliers were surprised by the whole event and the number of visitors which they had not had at their stadium for a long time. We hope that this tradition of supporting our basketball players and the magnificent performances of Serbian culture will continue and be enhanced in the future.

After the game, I had the opportunity to ask Jokic a couple of questions. On behalf of the Serb National Federation, I presented him with a copy of the American Srbobran and the movie “Tesla Nation” by Zeljko Mirkovic, which is dedicated to Serbs in America. Jokic enthusiastically accepted the gifts and genuinely thanked me.

How do you feel about your role as Serbia's main Sports Ambassador to the United States?

It's a nice feeling that people, especially Serbian people, recognize you when they come to watch the games because of you. I have the honor and respect for all of these people, and it makes me give my best. It's always nice to play in front of our people.

My experience with the Serbian Diaspora is small. When we have matches, we do not spend more than a day in that city. We arrive at 5 or 6 p.m. and go out for dinner. There is certainly very little time. I had a couple of friends from Sombor, Serbia, in Chicago and Toronto last year and the year before, but they returned to Sombor. In most cases, I see the city in this way and meet some of our people. Basically, I don't have time to visit the Serbian communities.

At the elementary school, “Dositej Obradovic,” which you attended in Sombor, Serbia, there is a mural with your image. What would you like for children to learn from you and what would be your advice?

My advice would be that they enjoy what they do and that it gives them happiness and satisfaction. If the children think that they will make something out of it or make money, they should not think about it. Children should play and be happy.

What is your message to young Serbs in America working to preserve Serbian ethnic identity?

I do not know how much they are doing because the children of most of our people do not speak Serbian. It is usual for the children to use the English language rather than Serbian because of the environment in which they live.